O Sikhism ou Sikhism is a monotheistic religion founded in the late 1469th century in Punjab (a region divided between Pakistan and India) by Guru Nanak (1539-XNUMX).

It is sometimes portrayed as the result of a syncretism between elements of Hinduism and Islam and Sufism. 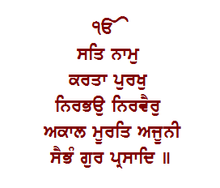 Text from Mul Mantar, the main prayer of Sikhism, in Gurmukhi alphabet.

The history of Sikhism begins with Nanak, a son of the ruling/warrior caste, who lived 1469-1538 and was born in northern India. He was influenced by holy men from the mystical branches bhakti, from Hinduism, and sufi, of Islam. Guru Nanak claimed that there was a supreme being, and held that all religions used different names for the same deity, which he called the sat nam ("Real name"). There are many similarities between Sikhism, Hinduism and Sufism (a branch of Islam). Sikh, for example, is the Hindu term for disciple. For Sikhs, the reason for this is very simple: truth is not limited to a single belief.

The term Sikhs it means, in Punjabi, “strong and tenacious disciple”. The basic doctrine of Sikhism consists of the belief in a single God and the teachings of the Ten Gurus of Sikhism, collected in the sacred book of the Sikhs, the Guru Granth Sahib, considered the eleventh and last Guru.

For Sikhism, God is eternal and formless, making it impossible to capture him in all his essence. He was the creator of the world and of human beings and must be the target of devotion and love on the part of humans.

Sikhism teaches that human beings are separated from God because of the self-centeredness that characterizes them. This self-centeredness (haumai) causes human beings to remain trapped in the cycle of rebirth (samsara) and do not achieve liberation, which in Sikhism is understood as union with God. Sikhs believe in karma, according to which positive actions bear positive fruit and allow for a better life and spiritual progress; the practice of negative actions leads to unhappiness and to being reborn in forms considered inferior, such as in the form of a plant or an animal.[4]

God reveals himself to men through his grace (Swim), allowing them to reach salvation. The Divine makes itself heard, revealing itself as a name. According to the teachings of Guru Nanak and other gurus, only constant remembrance of the name (nam simaram) and the murmured repetition of the name (nam japan) allow human beings to free themselves from haumai.

Ethics and forms of worship

Sikhism places emphasis on nine duties, described as the Three Pillars of Sikhism:

O Harmandir Sahib (The Golden Temple in Amritsar) is the most important Sikh temple. An intervention by Indian troops ordered by Indira Gandhi in the early 80s led to the Sikh revolt and the assassination of the Indian Prime Minister in 1984.

Sikh men use the surname (surname) Singh (“Lion”) after the first name. women use Kaur (“Princess”) as a second name. The non-acceptance of the caste system by Sikhs is reflected in the fact that many Sikhs prefer to avoid using the surname (surname), which is closely linked to the identification of castes, using only their individual name followed by Singh or Kaur.

Men hold their hair with a turban (which can be white or colored), while women wear a scarf. Those who cut their hair or beard are called by the Orthodox pat, that is, is “fallen” or “renegades”.