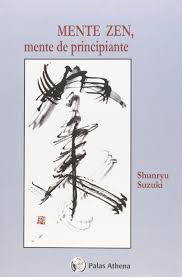 Posted at 07: 53h in Buddhism, Introduction to Buddhism, Shunryu suzuki by stew

Zen Mind is one of those phrases that Zen masters use to make you self-observe, go beyond words and start thinking. I know my mind, you say, but what is Zen mind? And if you try to sit and be physically still for a while to see if you can find out what your mind is and try to locate it, then you have started the practice of Zen, you have begun to realize the unlimited mind. The innocence of this first questioning – just asking yourself what am I? – it's a beginner's mind.

This book is about practicing Zen as a discipline and viable path; about posture and breathing; about the basic attitudes and understandings that make the practice of Zen possible; about non-duality, emptiness and enlightenment. Through him we begin to understand what Zen really is. And above all, each page breathes the joy and simplicity that make a life free from conditioning possible.

Shunryu Suzuki was a direct spiritual descendant of the 1958th century great Zen master, Dogen. Deeply respected in Japan, the author went to the United States in XNUMX, where, impressed by the quality of the beginner's mind and the seriousness he found among Americans interested in Zen, he ended up settling in San Francisco. There, he went on to lead a meditation group called the Zen Center, which expanded to three more locations, including the Zen Mountain Center, the first Zen training monastery outside of Asia.